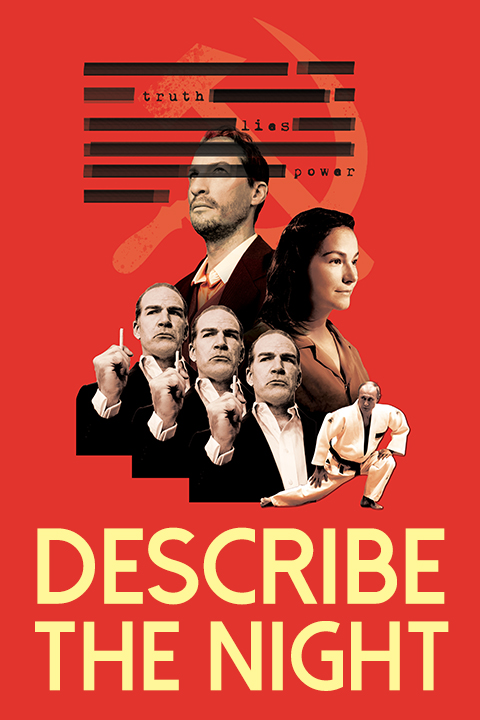 An interview with DESCRIBE THE NIGHT playwright Rajiv Joseph

WILMA DRAMATURG WALTER BILDERBACK: Why do you think audiences should come to see Describe the Night? What do you hope audiences will take away from seeing it? What questions do you hope they ask themselves?

PLAYWRIGHT RAJIV JOSEPH: My main goal with any play is to entertain and to weave a dream-like story.  I want and hope audiences lose themselves in the tales of this play.  It’s not a history lesson, nor is it a political dissertation of any kind.  It’s a fairy tale, a collection of myths.  I do hope it’s thought provoking, and that people can talk about it, discuss it, and find aspects of the story that speak to them long after the curtain has gone down.

It’s a fairy tale, a collection of myths.

WALTER: What prompted you to write this play?

RAVIJ: About 15 years ago I bought a copy of Isaac Babel’s 1920 Diary, which survives in fragments, with large portions of it destroyed.  I was drawn to this work, and how one could see a creative mind beginning to flourish.  I wondered if there might be a play about Babel’s artistic process, and his experiences with the Red Cavalry in Poland.  But I didn’t pursue writing the play; it was on a backlist of ideas.

In 2010 when an aircraft carrying a large swath of the Polish government crashed in Smolensk, Russia, I wondered if there was a way of connecting that event to the Polish-Russo War and Isaac Babel, but that seemed even more unwieldy for a play.  But when I was given the opportunity, through the NYU Graduate Acting Class, to develop a new work with the students there, I figured this might be the idea.  Through the research efforts of the students, and our collaborative process, I found the third story that fit in the middle:  That of a young, confused KGB agent in Dresden in the 1980’s, who could be Vladimir Putin. The three stories work as sort of gears, each pushing the others to make the play move.

WALTER: The central characters of the play are all based on historical figures, but you’ve played around with the facts about their lives: how does this relate to the theme of truth and fiction in the play?

RAVIJ: All three story lines of Describe the Night address this question of what is true and what is not true, and the varying degrees of truth.

Seeing how Babel’s work bended reality towards his fiction was the first step for me in constructing the play like this, but that connected to the Smolensk crash and how, in all liklihood, the public will never know the actual truth of that crash.  (Some people think it was simply a tragic accident, others believe the crash was premeditated act of war… whether it is one or the other, the Russian government has done nothing to allay fears of conspiracy.  The remains of the plane remain in a bunker in Russia.  It is almost as if there is a desire, on the part of the Russian government, to foment confusion, suspicion and fear.)

Finally, in researching the way the Soviet government and the NKVD dealt with information, news, censorship, and the suppression of artistic voices, the very idea of “Truth” when it comes to Soviet history seems fragile at best.

WALTER: The journalist Peter Pomerantsev, in his new book This is Not Propaganda writes of a “war against reality,” asking “what are the consequences in a world where the powerful are no longer afraid of facts?” Do you see a lineage from the ’30s to a “post-truth” world, or is this something new?

RAJIV: It’s not just a lineage from 1930’s Russia, I think history itself has always been suspect.  In every story, in every news report, in every history book the majority of the relevant information is, by necessity, left out.  Like Babel’s diary, we are only given fragments of the past through which we can attempt to discern a logic.  This is simply the nature of storytelling and memory.  But darker forces throughout history (continuing to the present day) have preyed upon the fragmented nature of information in order to control people and create fear and confusion.  Or as others might say, in order to keep the peace.

RAJIV: I met Blanka at the production of Describe the Night at Woolly Mammoth last summer.  The Woolly production was the first one to divide the play into 2 acts instead of the original 3 acts.  I was interested in how this would change the play, for better or worse.  I thought it changed it for the better, but then, in seeing it, I wanted to continue to shape the play so it fit into this structure in a more pleasing way.  Blanka agreed with me and made several useful suggestions that I followed.

I think the Wilma version of the play is the best one to date.  It’s hard to get a story right.  Especially this one.  I’m excited that I have this opportunity—with a theatre like Wilma and a director like Blanka—to finally bring Describe the Night into what it is supposed to become.

I think the Wilma version of the play is the best one to date.

WALTER: I know you did a lot of research while writing the play. For the historical characters, were there any “Aha! moments” in the research that inspired you? Things you discovered that really surprised you?

RAJIV: Too many to recount here!  The truth is always crazier than fiction.  When I discovered that Babel was close friends with Nikolai Yezhov—that a writer of subversive fiction could be friends with the head of Stalin’s secret police… and then have an affair with the man’s wife… that seemed almost too crazy to be true.  Likewise, the notion that the Smolensk aircraft crashed in the Katyn Forest in April of 2010.  Exactly 70 years earlier, the Soviet army was carrying out the Katyn massacre, in the same forest, in which 22,000 Poles were executed and buried in a mass grave.  Sometimes these details seemed too unbelievable to even fit into a play.  But they also made me believe that there was a deep connective tissue between all these events that my play could attempt to tease out.

Describe the Night plays at the wilma THEATER IN PHILADELPHIA FROM Jan 28-Feb. 16, 2020.