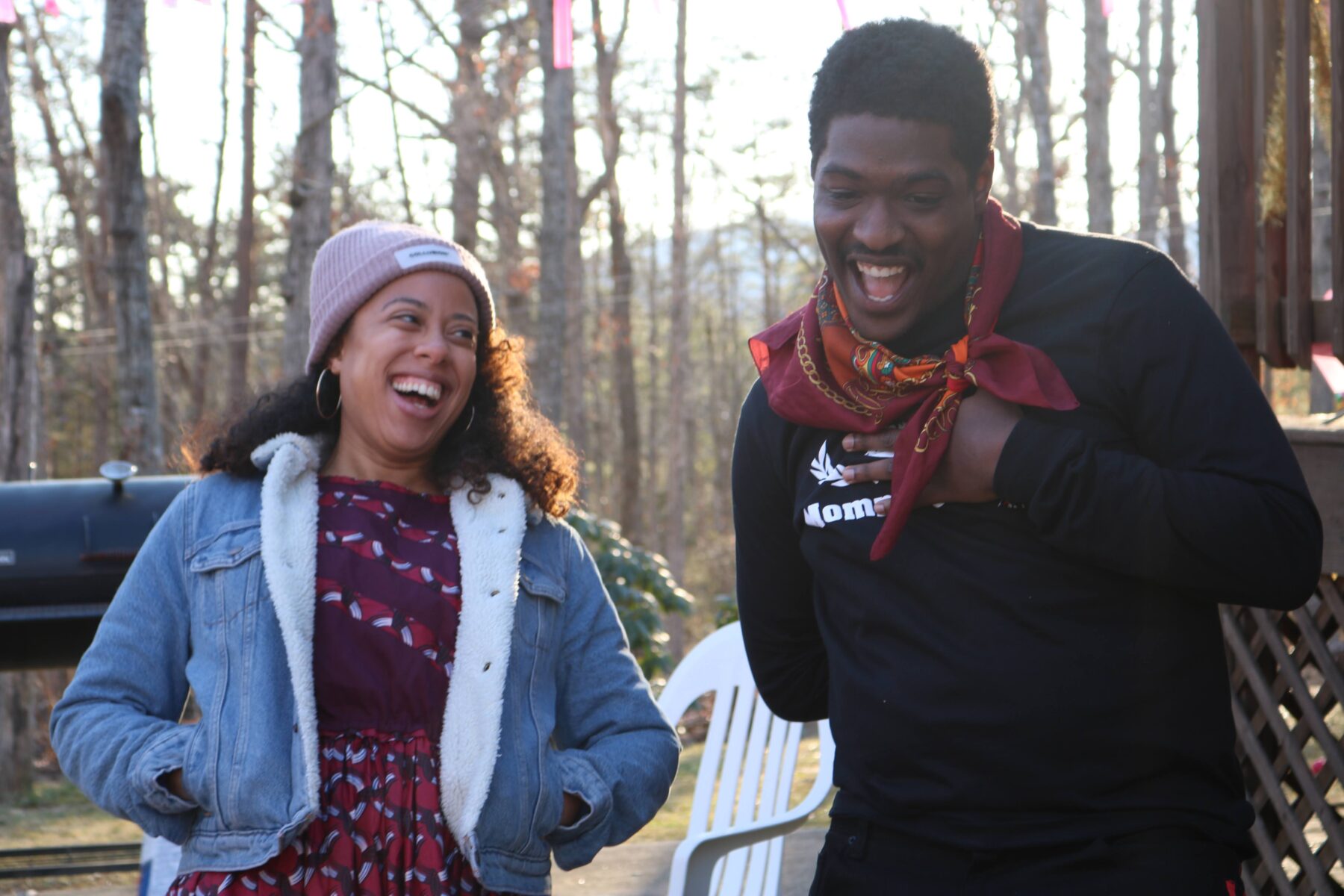 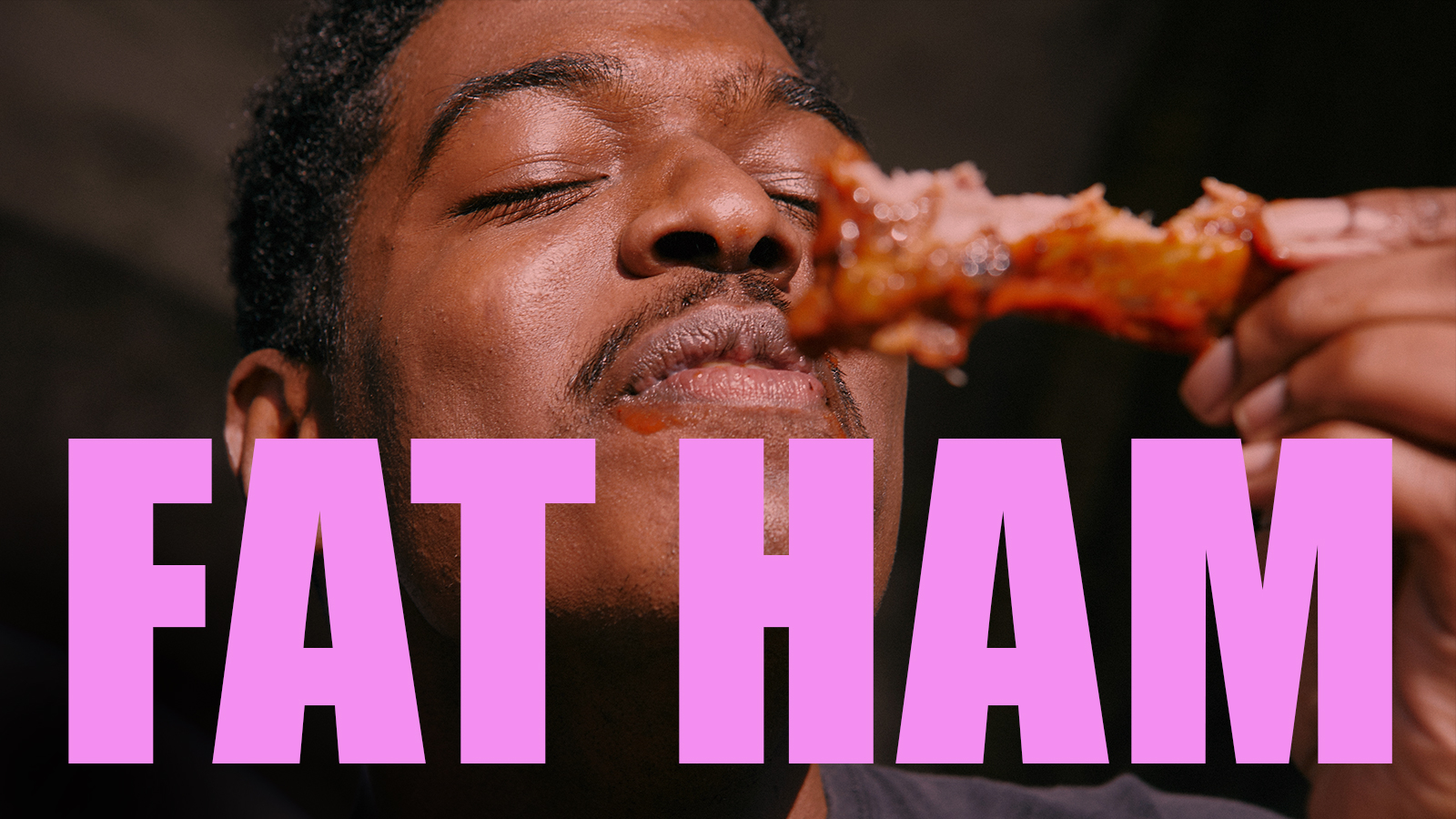 To honor the original people on whose land Fat Ham is being captured, please click here to read this land acknowledgement.

Associate Director Briana Gause is sharing the inside scoop into the making of the digital capture of James Ijames’ new play FAT HAM, a modern adaptation of HAMLET, which will be available to stream on demand April 20-May 23. (Tickets available here.)

FAT HAM was filmed in Virginia, following strict health guidelines, including having the creative team live and work in a contained “bubble” and frequent COVID testing.

After the first wave of travelers came and settled in we gathered for testing and a walk through. It was so exciting to see everyone gathered in one place. As we stood and waited for test to get done, and folks to arrive, the inevitable kiki began to ensue. And with every laugh the anxiety of “We’re doing a what?! And Here?!?” slowly drifted away with the cool Virginia breeze.

Director Morgan Green led the designers around the exterior of the production house pointing out all the places she was envisioning this play would unfold. Now that we could see the property with our own eyes, new ideas started to bloom as we took in the sun and the sounds of the mud beneath our feet.

The next day we jumped right into it! Table work – where we read and analyzed the script – and staging took off.

Down from the greenhouse you could hear Brennen S. Malone serenading us with Radiohead. This is the first time I got to hear “Ophelia’s Song,” which Sound Designer Jordan McCree is so carefully crafting for the show. As Jordan and Brennen worked through it, Joy began to fill the room.

FRIENDS OF THE FARM

Driving to the production house everyday we pass fields and fields of animals.

We’ve seen cows, sheep, horses, dogs. But, when we pull into “The Abundant Seed,” the name of our production house, we are met with three goats, a shaggy white dog, and Bilbo, the friendly outdoor cat.

The weather starts to warm up. We’ve all been bundled up as we run around outside, taking up all the space we can. But each day you start to see more and more layers being shed as the sun shines on.

Yellow is a recurring theme for this team. Each day I’ve counted how many folks are wearing the team color. The answer is four.

Every day four different people wear the color yellow, and I am always one of them.

It was a big day when the truck arrived carrying sound and video equipment.

As folks began unloading, Fight Choreographer Ian Rose began working through fight choreography. We’d run back and forth seeing what we could pull right off the truck and throw into staging. Once we finally had the full cast, team, all the props, and set pieces, it finally felt like we had begun. As Director of Photography Leslie Rivera and Assistant Director of Photography Taj Rauch are learning to dance with the actors, I’m excited to see what next week brings. We’ve staged half of the play already!

Who knows what will come next!

It was the first Friday in Virginia, and as the cast returned to set, we were met with the beautiful work of our fantastic crew. String lights and streamers galore decked out the yard of our production house. The Abundant Seed was ready to host the wedding reception of the year!

Friday night surprised us with some snow. So when we regrouped on Saturday, Company Manager Mariah Ghant came in clutch with a new load of Hot Hands and toe warmers to keep us all going. The day started with Noelle leading the full cast in a compliment circle. As we sat, bundled under our plastic wrapped porch, we went around warming each other with our words. Soon to follow was the fight call with Ian. It was Ian’s last day with us. And thanks to Taj locking Ian’s keys in his car, we got to keep him for a few extra hours.

We worked on blocking two of our bigger full cast scenes: charades and karaoke. All of the jumping and singing on tables kept our spirits high and almost made the winter air not feel so cold.

Another off day crept upon us, and while most folks were home trying to get some work and rest in, the production house got a new wifi upgrade! Being deep in these woods is no joke. Most of our team are teachers, and having to do virtual school was already hard, now imagine trying to stream videos, or play music for your students with no service. Our connection to the world outside this bubble has been spotty, but with this new boost, more folks have had an easier time getting in touch with those they needed and work is getting done!

As Rachael Blackwell started to light the show, we hit a new hiccup for the day. Fat Ham is so powerful, it blew a fuse in our production house, knocking out some of our power. Soon a generator was ordered along with a 200 foot extension cord. But just like the liberated folks who are making this production happen, no matter where we place that hub of energy, it will continue to make itself heard.

Finally our week ended with the first food day! We had ribs, pork shoulder, a smoked ham, brisket, chicken, and even some key lime pie. Actors were able to dig in and test out everything our lovely props master Missy had ordered. And what they didn’t eat in rehearsal, we all got to enjoy at the bonfire. The night before our off day, Grip Ben Henry built us a raging fire, and Mariah provided us with materials for s’mores. The second Marvin Gaye’s “Got to Give it up” came on, the celebration of us began.

Friday was the beginning of what we might traditionally call “tech week.” But here in Virginia, we’re calling it “capture week.” Actors finally got to step into costumes as we ran through our first cue to cue. From there, tiny tweaks were made day-to-day in the script, the props, and the blocking as we tried to nail down the final looks for this production.

This week as folks couldn’t be in two places at once, I found myself stepping in and sharing the stage with some of Philly’s most legendary actors. Now of course I was not off book, and was dropping pages from my loose script all over the place, BUT, it sure was fun to make conversation over pickled okra and watch these folks work from such a close vantage point.

Thanks to all the work from the cast and crew, once the sun settled into the most ideal location we were ready to start recording for keeps. After putting Bilbo in his room, a few of us gathered in the garage to watch the monitors, actors got into places, and the crew stood by ready for our first call to “Action.” Between each take, folks ran from one location to the next, adjusting hair, changing lights, and unleashing the hidden piano in the woods. On that first day of filming, you heard a few wishes of “Happy Opening” float around the space. But one response I also heard was from a wise Lindsay Smiling, “It’s not opening. It’s just another day in an ever evolving process.” And he was right. We called cut, packed everything up, and prepared for the homework.

Now that we found a way to upload footage for everyone to see, once we got home, we reviewed, took some notes, and found time to eat and sometimes sleep before starting it all over again. That became our pattern for the rest of the week. Wake up, get tested, do a wellness check in, make some adjustments, and record.

Our last day running the entire show was Friday, March 12th. Early that morning, as folks stood in line to get COVID tested, I found Grip Benjamin Henry chopping wood for later that night. After taking a few pictures, I put my camera down and learned how to wield an Axe. Let me tell you, it was EXHILARATING! Only to be followed up by Anthony Martinez-Briggs showing me where the goat feed was, so I could officially make friends with our furry companions.

That night as the sun began to set we filmed at least 4 different endings for our final moment. Over and Over we heard the music blare and watched as folks ate, drank, partied, and carried on, sending us all into fits of howling laughter and invigorating us with moments of pleasure. And with our last 30 minutes on set, the porch filled with smoke, the disco lights glistened, and Brennen and Brandon gave us all life as they danced with glittered faces into the night.

7 p.m. hit, and that was that. Costumes and props went away, but the food and music stayed. Of course, this week ended once again with another legendary bonfire. The break and celebration was so needed and welcomed that we actually forgot to have a production meeting that night. The party just started rolling and didn’t dare to stop till all the cupcakes were gone.

We still have another two days left in Virginia. But once Monday comes, the Abundant Seed will be struck, and returned back to how we found it. We’ll all sadly say our goodbyes to the clear night skies and the beautiful wide open fields. But we will also gladly be saying goodbye to the Trump flags, and lack of cell service. Working on this production has been quite the experience. Don’t get me wrong, there’s still lots of post-production work left to do. But for now, I will say I am most grateful for the opportunity to work with such a talented, generous, and fun-loving group of people. A huge thank you to everyone who made this production possible!! I hope you all enjoyed this journey as much as I have.

See you at opening!