A reading of “Insulted. Belarus(sia)”

In solidarity with the people and theater community of Belarus, the Wilma Theater is presenting a free performance of Belarus writer Andrei Kureichik’s sensational and timely new play, Insulted. Belarus(sia). The free performance was presented live on this web page on Saturday, Sept. 26 at 8 pm and the recording was available until Tuesday, Sept. 29.

READ/LISTEN: Play about Belarus uprising on stage in Philly, and around the world  -WHYY

Insulted. Belarus(sia) tells the story of the first month of the ongoing Belarusian revolution, where the people are protesting after President Alexander Lukashenko – known as Europe’s last dictator – claimed victory in a contested election. Polls showed Lukashenko badly trailing his opponent. The unprecedented national protests have continued despite mass arrests, police brutality, and the torture of protestors.

Insulted. Belarus(sia) features characters inspired by the real life political leaders and protestors, with some dialogue taken verbatim from the public record.

OLDSTER, President Lukashenko. Some of OLDSTER’s lines are verbatim.

YOUTH, Lukashenko’s teenaged son Kolya, who is being groomed for the presidency, but would prefer to play internet games.

NOVICE is Svetlana Tikhanovskaya, the housewife who, by all accounts, defeated Lukashenko in a landslide on Aug. 9, 2020. Quite a few (not all) of her lines are verbatim.

CHEERFUL, a high-spirited, loving young woman who believes in asking the Universe to send her good vibes, and whose sister is to marry the storm trooper.

AVIAN, a storm trooper who trained during the Maidan revolution in Ukraine and is now in Belarus to put down rebellions there.

CORPSE, a young soccer fan with too much energy to burn who is sick of living under the same president his entire life.

MENTOR, an aging teacher who believes in “law and order” and helps guarantee Lukashenko’s reelections every four years by falsifying results.

The lives of every one of these people – with the possible exception of Kolya, for his debt to destiny is yet to be paid – will be impacted tragically by Lukashenko’s decision to crush the revolution with violence and torture.

LEARN MORE ABOUT THE BELARUSIAN PROTESTS

“Theatre in Belarus: We Will Never be the Same” -American Theatre Magazine

“I hope that the effort of the theaters worldwide producing readings of Insulted. Belarus(sia) by Andrei Kureichik will help attract some attention of the Americans to this issue. I feel like the themes of stolen presidential elections and of the Russian influence aren’t completely alien for the current American political moment.” Wilma Lead Artistic Director Yury Urnov 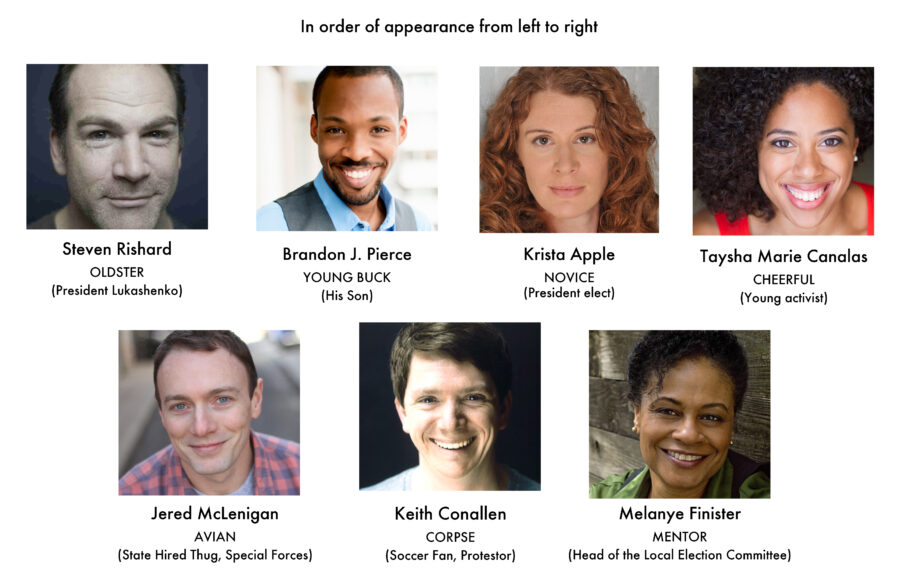 KNOW BEFORE YOU VIEW

This play uses strong language and imagery to vividly depict violence – violent protests, torture, and violence against women. While set in another country and culture, the events in the play closely parallel events experienced here in the United States and may trigger trauma responses for many individuals. We want to provide a special note that many of the experiences in the play are connected to protesting, and as such may connect with lived experiences of activists and community organizers.

Andrei Kureichik is one of the top playwrights, screenwriters, and producers in Belarus. Author of some 30 plays, he has 17 credits on IMDB as a screenwriter, four as a producer, three as a director. His plays have been performed at the prestigious Moscow Art Theatre and Janka Kupala Theaters in Moscow and Minsk, as well as at numerous theaters throughout the former Soviet Union. Andrei wrote a much-read article about the events in Belarus two weeks ago for American Theatre Magazine. He is a member of the Coordinating Council of Belarus, whose members are called upon to lead the transition to a new government in Belarus. Many of the members are now in prison.

Through this free reading, the Wilma is joining dozens of international theaters and schools in performing this play to spreading awareness about the political protests in Belarus. Follow the other international readings and the latest about the play on Facebook and Twitter.

Support the Victims of Repression

Play about Belarus uprising on stage in Philly, and around the world
The Wilma Theater Participates In Worldwide Reading Of Andrei Kureichik's INSULTED. BELARUS(SIA)
​