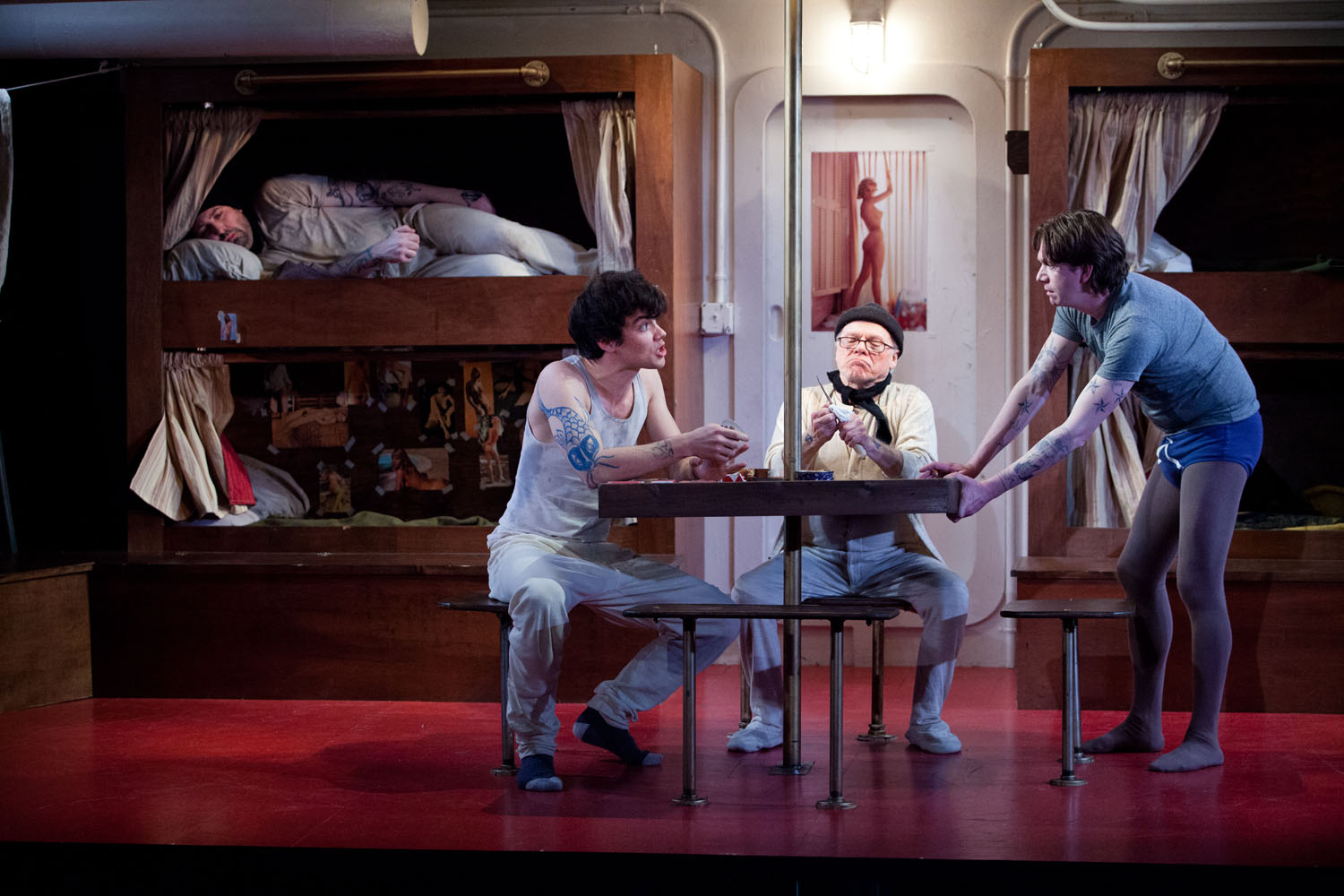 The year is 1965. Aboard the Kingston Jet docked in Hull, England, a new teenage sailor Daz receives shocking information about his lineage from a legendary deckhand. Flash forward to 1972. A violent storm off the Icelandic coast thrashes the James Joyce and its crew of merchant fishermen, including Daz, with fatal consequences. Flash forward again to 2002. Daz is now 54, a father, and the curator of the Arctic Kestrel museum ship. A mysterious stranger unexpectedly enters after hours, making furious accusations and playing a dangerous game. Connecting three riveting snapshots of time with stunning twists, Under the Whaleback depicts one of the most dangerous occupations in the world with maritime theatricality, larger-than-life heroics, and unrestrained dark comedy.

American audiences were recently introduced to British playwright Richard Bean when his West End comic phenomenon, One Man, Two Guvnors, moved to Broadway. The Wilma’s North American Premiere of Under the Whaleback – reminiscent of Eugene O’Neill’s great sea plays – shows the wide range of his talent which is quickly becoming internationally recognized.

“For Americans who know British playwright Richard Bean only for his hit Broadway farce One Man, Two Guvnors, his 2003 drama Under the Whaleback is quite a shock — and should have theater companies rushing to read his many other plays. The East Hull native’s drama about his city’s once-thriving fishing industry receives a stunning Wilma Theater North American premiere.”
— Review in Philadelphia City Paper
click to read more
“The production’s casting is spot-on!”
— Review from STAGE Magazine
click to read more
“We’re trying to make the movement of the boat as mysterious and dangerous as possible.”
— Feature in Philadelphia Metro
click to read more
“Poets and playwrights have glorified the exploits of seafaring men since Homer’s Odyssey. The Wilma Theater presents a more personal, though no less inspiring, look at this tradition in its riveting North American premiere of Richard Bean’s Under the Whaleback.”
— Review in The Philadelphia Inquirer
click to read more
“When you read the play, it reads like three folktales,” [Pearce Bunting] says. “And when you get to the end, it feels like an epic.”
— Feature in The Philadelphia Inquirer
click to read more
“All the actors in this Wilma production are quite extraordinary…the whole cast is completely engaged in the piece”
— Review from Curtain Up
click to read more